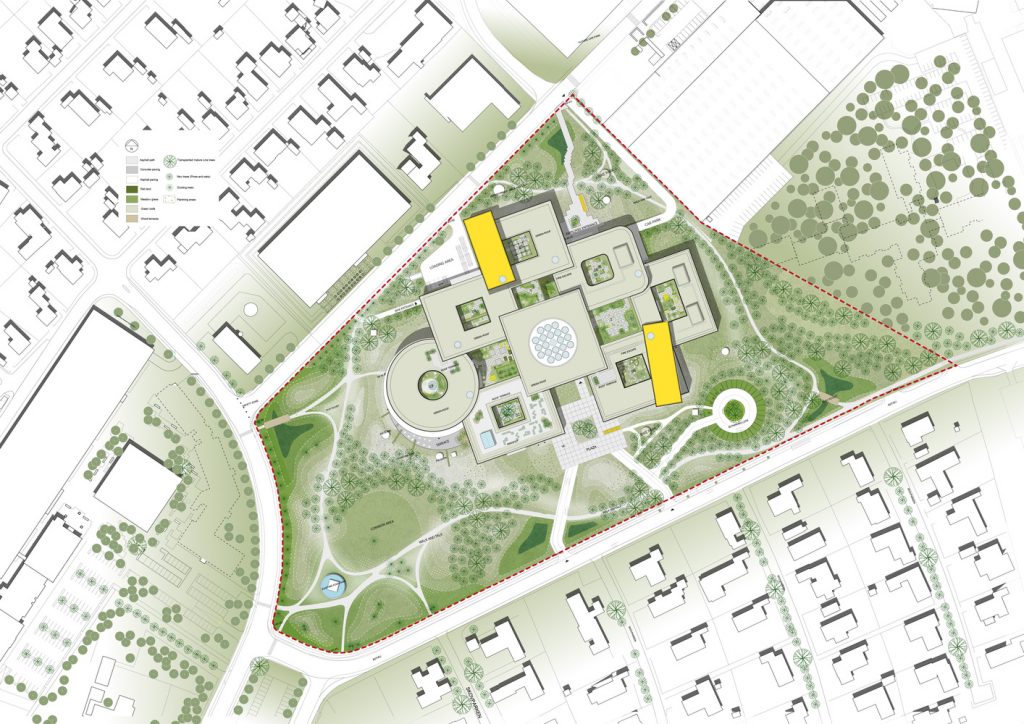 The surveyor prepares the “official site plan” with the plans from the architect. Official site plan is an important document when applying for a building permit, because the house must be built according to this plan. The positions, heights and dimensions must be strictly observed. A section of the official site plan can look like this:

Official site plan is a very large sheet with all possible information about the building project. The official site plan contains information about the “type and extent of the structural use”, as well as clearance areas, builders and property owners. It also contains the location of the property, the construction window and much more. For example, the image above shows some clearance areas, building dimensions, and elevations. Water and sewage pipes are drawn in blue and brown, and the property boundaries are marked with white dots (circled in black). The signs used are explained in a legend on the official site plan.

The surveyor should have taken into account any regulations already in force on the site plan. It may be necessary to maintain a building distance of 3m from the property line to the neighbor. It can be important that the buildings on the street are positioned in a straight line. If a balcony does not require supports, then it may protrude out of the construction window. However, the balcony must not be longer than 1/3 of the respective side of the house. The ridge height (usually the upper edge of the building) must not stand out too much from the neighboring buildings. A number of other regulations may apply. It is the responsibility of the architect and surveyor to comply with these regulations.

The official site plan must also be requested as a PDF, as this is often helpful for further planning.

Sometimes it pays to take a second or third look at the site plan. At first glance, everything looks very complicated and squashed. But maybe you can “discover” something here with which you can save costs.

You need a lifting system. However, this is not cheap and requires regular maintenance. Risked a sharp look at the official Site plan and you had already discovered another sewage pipe nearby. This is a few meters further, but below the sewage pipe from the house. To solve the problem, the surveyor must be informed and asked to make corrections.

Another example is the rainwater fee. This is due every year and usually depends on the paved area and the roof areas. Rainwater enters these surfaces and is drained into the sewage system. The municipality or the city incurs costs due to the operation of the sewage treatment plant – this is what the fee is charged for. The situation is different when there is a creek nearby. Sometimes the rainwater may be discharged there. To do this, an application must be submitted and approved. There are also costs (approx. 200 euros), but only once.

The official site plan should therefore be checked very carefully and only then signed. The documents of the architect and the surveyor are the basis for the first big step: the building application. But first the architect has to prepare a few forms and have them signed by the client.

5 Reasons Why You Should Purchase Anthracite Towel Radiators

What You Need To Know About Mat Cleaners