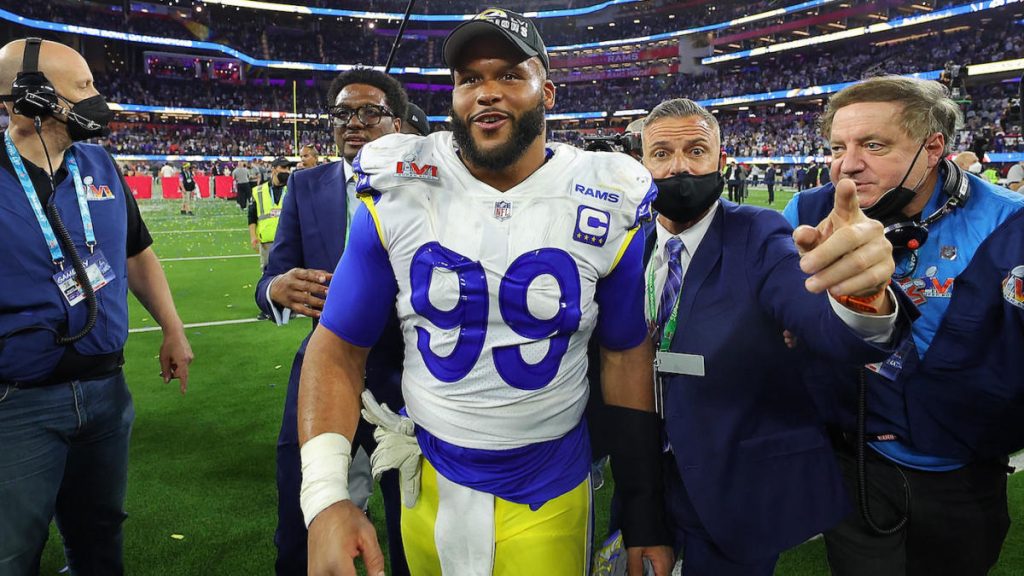 Aaron Donald is not only set to forgo potential retirement to help the Rams in their attempt to repeat as Super Bowl champions but he’ll now be paid handsomely to do so. The All-Pro defensive tackle has agreed to rework the remaining three years on his contract with the Los Angeles Rams, and in doing so, has now become the highest-paid non-QB in NFL history.. .

Specifically, Donald is set to receive a $40 million raise by the Rams and will see $95 million in totality on his contract that runs through the 2024 season. Over the next two seasons, Donald will be guaranteed $65 million. As the contract is structured, Donald will then have the ability to either retire or return in 2024 for an additional $30 million guaranteed. The deal also includes a no-trade clause, per ESPN.

“I’m locked back in to go get us another ring. Why not?” Donald said in a video the team posted after announcing the deal. “At SoFi Stadium, getting chills thinking about it. Let’s go to work.”

This contract restructure has been in the works essentially since the clock hit zero in Los Angeles’ victory over the Bengals in Super Bowl LVI. Over the course of these negotiations reports had even trickled out that Donald would be content with retiring if he was not given a raise that better reflects the current market and where he stands are arguably the best defensive player in the entire NFL. There was also questions regarding Donald’s attendance at the Rams’ mandatory minicamp. However, his presence is no longer in doubt as he has reportedly taken a physical and signed his new deal, ensuring he’ll be back for L.A.’s title defense.

“It’s not great news, it’s phenomenal, outstanding, any nice adjective that you can place around it,” head coach Sean McVay said of Donald’s deal on SiriusXM. “But it is, it’s a big deal and he’s earned it. And he truly is one of one in my opinion. Means so much to me, to our organization. I think the respect that he’s garnered around this league from guys that have done it at such a high level, what he’s accomplished through his eight years is unparalleled.

“And so [we] wanted to be able to find a solution to, you know, getting him taken care of. Having him continue to lead the way for our team, for our defense. And, you know, we had a feeling it was trending in the right direction when he was at our wedding on Saturday night. So, a lot of good things have happened the last couple days for me.”

Donald is no stranger to resetting the market on the defensive side of the ball. Back in August 2018, the now 31-year-old signed a six-year, $135 million extension that included $87 million guaranteed. At the time, that made Donald the highest-paid defensive player in NFL history, but he had since been leapfrogged prior this latest deal.

The Pitt product has spent his entire career with the Rams after they selected him with the No. 13 overall pick in the 2014 NFL Draft. Upon arrival, Donald has established himself as one of the greatest defensive players of all time and a no-doubt Hall of Famer. In his career, Donald has been named Defensive Player of the Year three times, is a seven-time All-Pro and has been named to the Pro Bowl in all eight seasons of his career.

Read Also: Cowboys’ Dalton Schultz irked by lack of progress in contract talks, to sit out remainder of 2022 OTAs

Things aren’t going as well as Dalton Schultz had hoped they would as it relates to his ongoing contract negotiation with the Dallas Cowboys. To be more accurate, they’re not going well at all. The veteran tight end received the franchise tag ahead of the deadline in early March that will pay him $10.93 million, and he has since signed it — operating under the belief there’d be a smooth path to landing a long-term deal with the team.

That road has instead been filled with potholes and cavernous divides, and Schultz is taking action by way of inaction. The 25-year-old has decided to sit out the remainder of OTAs in protest of how far apart he and the Cowboys are on a new deal, sources confirmed to CBS Sports.

Having already reported and been present for much of them (May 24-25 and June 1-2), if Schultz follows through on his threat, and it’s likely he will, considering it’s what little leverage he has right now; he will not be subject to any sort of fine for missing the final four practices (June 6-7 and June 9-10), because OTAs are indeed voluntary.

And as former Cowboys linebacker Darren Hambrick so eloquently stated in yesteryear:

“What do voluntary mean?”

That said, things get hairy for Schultz and the Cowboys when when minicamp begins on June 14. That’s because minicamp in June is mandatory and, as such, the former would be subject to fines from the latter that escalate daily and could approach the $100,000 mark if Schultz sits out all three days. Signing his franchise tag guaranteed he’s under contract now for the 2022 season, which is why he could be fined as opposed to operating freely during talks, essentially shoving all of the leverage over to the Cowboys side of the equation.

The two sides still have until July 15 to hammer out a long-term deal, and training camp isn’t slated to begin until nearly 10 days after that deadline, so there’s still a chance this could all progress toward a happy ending. If no deal is struck, however, a frustrated Schultz would have only two options: play the 2022 season under the tag or sit out and face a substantial amount of ongoing fines, seeing as the new collective bargaining agreement enacted in 2020 effectively put the kibosh on player holdouts nowadays.

And for accounting purposes, the CBA now allows teams to fine players who aren’t under a rookie deal a hefty sum of $50,000 per day for every missed training camp practice.

For his part, he’s made it clear he wants to remain in Dallas.

“Obviously, I think this is the place that I want to be,” said Schultz in April. “I’ve got a good rapport with a lot of the guys here. I love being here. I love this organization. I was grateful that I was able to at least come back here for a year.

“I want to work out a long-term deal and I think they do too.”

Dalton Schultz
He did leave the door open for a possible swan song, however, considering the business of the NFL and, as an unstated point, just how difficult long-term contract negotiations have proven to become in recent seasons with the Cowboys front office (e.g., Dak Prescott, DeMarcus Lawrence, Ezekiel Elliott, Randy Gregory, etc.).

“Hopefully, we can get that done,” he added. “But just knowing where I’m going to be for the next year, I’m happy with.”

Only, at the moment, he isn’t.

It’s clear the Cowboys found themselves upping the value on Schultz after he not only had a career year in 2021, reeling in 808 receiving yards (10.4 per catch) and eight touchdowns, but especially after parting ways with former starting tight end Blake Jarwin, released after undergoing a rare hip procedure that may keep him out of football all of next season and potentially beyond.

But do the Cowboys, or have they ever, had a plan that would see Schultz set the market at the position?

That answer, to this point in the timeline, is a resounding “no”, and the Cleveland Browns (as one example) didn’t do either side any favors this offseason. In signing David Njoku to a four-year, $54.75 million contract after initially applying the same franchise tag as did the Cowboys to Schultz, the marker for Schultz had officially been set, but the Cowboys are having a hard time swallowing those numbers — despite Schultz having been far more productive over the past two seasons (735 more receiving yards and six more touchdowns since 2020) and being the top target for Prescott heading into 2022.

Though the Cowboys also see areas that need improving, e.g., run blocking. Additionally, the club doesn’t feel it’s without firepower at the position post-draft, still loving the ceiling on Sean McKeon and, interestingly enough, they used their 2022 fourth-round pick on rookie tight end and former Wisconsin standout Jake Ferguson, the same round in which they selected Schultz in 2018 (hint). It’s quite plausible that while the Cowboys want Schultz in uniform in 2022, that his value to the club may have dipped a bit with the selection of Ferguson who, at initial face value, has at least a shot at supplanting Schultz eventually — making contract negotiations a little less cozy for the incumbent.

Both sides have negotiating points, and both sides are currently dug into them, as an impasse arrives.

Tagging Schultz was never going to preclude the Cowboys from grabbing a tight end in the draft, as CBS Sports reported in March, but instead provided a roughly $11 million insurance policy in the event they didn’t walk away with one. Having now done so, and with McKeon presumably on the rise — with eyes also toward other inexpensive young talent like Ian Bunting and 2022 undrafted rookie free agent Peyton Hendershot — the Cowboys feel they have enough options to not necessarily toss Schultz to the side, but to try and drive his price down to something they deem reasonable.

The problem for the club is he doesn’t agree with their offers, and he’s making it known in a big way. The problem for Schultz, however, is much more robust, because he’s already signed his franchise tag. That means he’ll either show up eventually and play, or start losing thousands of dollars that can quickly escalate into the millions when factoring in training camp fines and lost salary, keeping in mind sitting out neither training camp nor actual games would change the fact the July 15 deadline would have already passed by then — making a continued stand (or rather, sitdown) beyond that date wholly moot.

The clock is ticking for both sides, but the Cowboys aren’t feeling as much pressure now as they were in March. That’s been transferred now to Schultz, who is locked into a one-year contract, with the conviction to his cause set to be put to the financial flames on June 12 and beyond.