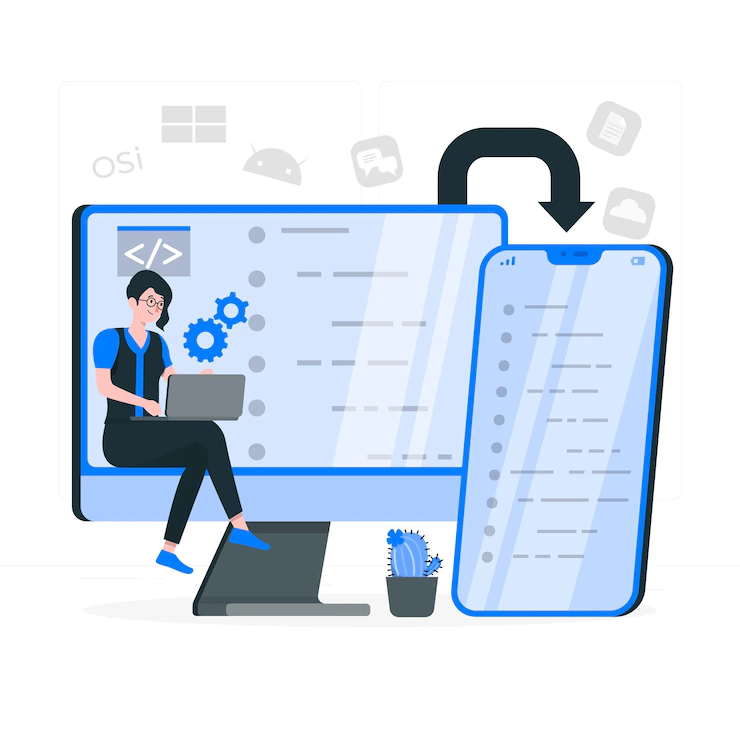 The demand for mobile applications has grown exceptionally across the globe. With the introduction of multiple platforms, the goal of mobile app development companies in New Jersey is not just to create an app, but the concern is to create an app for each platform. WORA – Write Once Run Anywhere allows a developer to write a piece of code at once that can run on multiple platforms. Moreover, once created, the design and application work great on different platforms like Windows, Android, iOS, and BlackBerry OS.

With multiple mobile platforms, cross-platform app development has become a viable commercial option. Now instead of native app development, a Cross-Platform app Development Framework with single code composition has started to rule the mobile app development world. It will help you not only with your development investments but also with all the problems you faced in updating and managing services or processes.

Cross-platform app development has become popular with the rise of the mobile app market. The mobile application market is set to grow at a CAGR of 18.40% and reach $407.31 billion in revenue by 2026.

There are many platforms listed below to help you with cross-platform mobile app development. Speed, features, support, and development costs need to be analyzed before evaluating them.

Xamarin is a fairly popular cross-platform app development tool that allows you to build native apps for Android, iOS, and Windows using a single shared C# code base. It allows you to implement similar APIs, IDEs, and language everywhere. Cross-platform app development with Xamarin can be tested on a variety of devices. Additionally, Xamarin offers easy integration with backends such as Foursquare, Microsoft Azure, Parse, SAP, and IBM. No platform can beat Xamarin when it comes to Ruby or C# application. Git integration is also built right into Xamarin Studio.

The platform is now owned by Adobe, which equally explains its growing popularity. Adobe is also developing an enterprise version of PhoneGap. It is based on the open-source Apache Cordova. Cordova is a set of device APIs that allow applications to access specific native device functions across different device platforms. Using cross-platform plugins and the Apache Cordova API, mobile app developers can build apps using HTML5, CSS3, and Java web languages. This will help develop a singleton application that will work on multiple mobile platforms. “The idea behind Cordova is straightforward. You can build your app once and be able to run it on a whole set of different devices.

Kony is an integrated cross-platform app development tool that is widely used to develop universal mobile applications. A platform using JavaScript and reusable widgets with the ability to import existing or third-party libraries. It provides auto code completion features, app preview features, API connectivity, and many other interesting features. As it comes with various pre-developed applications, it works as a great starter for both beginners and developers. It also offers unified mobile infrastructure services that support backend systems.

React Native is the next generation of React – a JavaScript code library. Which was developed by Facebook and Instagram developers and was released on GitHub in 2013. Today, React Native is the most versatile platform and you can use it to develop “mobile web apps”, “HTML5 apps” and also “hybrid apps”. A basic, mobile app that’s indistinguishable from a mobile app developed with Objective-C or Java, React Native uses the same basic UI building blocks to build regular iOS and Android apps.

Since it is supported by Facebook, you can expect regular updates to this framework. Now, if you want your apps to perform best overall on the available mobile platforms, React Native is the best hybrid solution.

Ionic is an open-source cross-platform framework used to develop a hybrid cross-platform solution. Ionic uses web technologies like HTML5 and CSS. It is a powerful HTML5 SDK that helps build native mobile apps using the most popular web techniques. It mainly focuses on the user interface interaction of the application. Iconic also uses AngularJS for a number of the core features of the framework. Although it is possible to create Iconic with only CSS part. In fact, an experienced mobile app developer will definitely recommend investing in AngularJS as it is one of the best options for building browser-based apps. Not only does Iconic look great, but it’s powerful enough to create amazing applications in any industry.

If your requirement is to develop a data-intensive cross-platform application that can support hardware acceleration techniques, then Sencha is the ideal framework to choose from. It offers a number of tools for cross-platform app development: Sencha Animator, Sencha Architect, and many more. Developers can use Ext JS 5 to develop an enterprise mobile application. Sencha Ext JS 5 unleashes HTML5 capability in modern browsers. It allows developers to create HTML5 apps and then convert them to native mobile apps using PhoneGap. This best-of-breed approach has been adopted by clients such as Google, Samsung, and CNN.

Sencha Ext JS enables developers to create applications that have great business intelligence for data analysis and visualization. In addition, it offers built-in native themes for all mobile platforms.

Appcelerator, a cross-platform app development tool, allows you to use a single JavaScript codebase to build, connect, and test. It also offers some value-added features: real-time mobile analytics and MbaaS – mobile backend as a service. High-quality drag and drop enables 60% to 90% code reuse when publishing to different platforms. It is the most suitable platform for rapid mobile app development. It comes with integrations like Microsoft Azure, SQL, Salesforce, MongoDB, and many more. It offers a private cloud for business customers, so if you work with sensitive business data, Appcelerator is the best choice.

Framework7 is an HTML framework for building Android and iOS apps. It is one of the free cross-platform app development tools based on Apache Cordova. It provides an application framework that is built on Vue.js. This framework recreates standard iOS designs and Google’s Material Design patterns to replicate the “native look” that mobile users expect. It can also be used with other frameworks like Angular or React if you want.

Flutter is Google’s answer to their own problem: “We continue to build iOS and Android apps for every mobile product; this is getting annoying.” Requires Dart to replace JavaScript. Not only does Flutter support Google’s own programming language, but it also remains closely tied to another Google product: Material Design. You can use a rich set of fully customizable widgets to quickly develop native interfaces. Organizations around the world, such as Alibaba.com, Tencent, and Google AdWords, are choosing Flutter to build apps. Because it’s backed by Google, it won’t settle for anything less. With the help of Google tools, you can create an application that is like Gmail, Google Maps, and other applications.