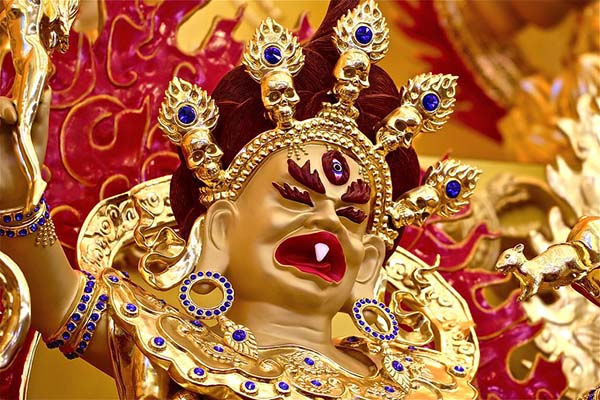 The presence of demons is often crucial to religious systems. These terrifying Buddhist monsters don’t just exist to scare you – they symbolize the mean and evil aspects of human nature. Tibetan Buddhists believe that everyone has Buddha nature and can attain enlightenment, but also believe that humans are inherently prone to succumb to their basest desires such as greed, ego, lust, and anger. Scary demonic Buddha often embodies impure thoughts and desires that lead to negative behavior, although some are just scary reminders to only do good deeds.

Tibetan Buddhism is a branch of Buddhism that developed from the combination of its indigenous religious belief of Bon and Mahayana. Bon consists of shaman practices. Under the further self-development of the primitive Tibetan shamans of the Qinghai-Tibet Plateau, it gradually formed Buddhism; on the other, made its foothold in Tibet in the 6th to 8th centuries. Initially, the Buddhism type adapted by the Tibetans only included Indian figures like devas, yakshas, and asuras. But later, other local Bon Tibetan gods and spirits got incorporated into Buddhist practices and beliefs. In Buddhism, there’s no concept of absolute evil demons as all sentient beings can improve their karma through practice.

Mahakala (The Great Black One)

Mahākāla is a common deity of Buddhism and Hinduism. This deity is a manifestation of Shiva in Hinduism. In Vajrayana Buddhism, however, it is the protector deity. As Mahakali’s spouse, she is very frightening. She is three-eyed with four arms. Mahakala, together with Mahakali, represent Brahman’s destructive power, and they do not subscribe to any regulations or rules.

Both Mahakala and Mahakali have the power to dissolve even the existence of space and time into themselves, and they may exist as emptiness after the dissolution of the universe. They can annihilate creatures without mercy because they are the personifications of space and time.

Palden Lhamo is an important female guardian deity of Tantric Buddhism. Palden Lhamo is derived from the ancient Indian myth Lakshmi, goddess of wealth and prosperity. In Tibetan Buddhism, Lakshmi has both peaceful and wrathful forms.

The fierce form is known as Palden Lhamo. She is usually depicted as deep blue in color and with red hair, riding side-saddle on a yellow mule. On her head, there are five human skulls. On the right ear, there is a small lion, which is said to symbolize listening to the scriptures, and on the left ear, a small snake represents wrathful. On her waist, she hang a notebook, dedicated to recording bad things done by sentient beings, whose skin will be flayed. In her left hand, she holds a stick crafted from human bone to deal with the evil spirit Asura. In the right hand, she holds a skull bowl full of blood.

Yamaraja (The King of Hell)

Yamaraja is a wrathful god or Dharmapala. He is said to preside over hells (Narakas) and is believed to judge the dead. And he also presides over saṃsāra (cycle of the afterlife). He can determine the goodness of a person in his life.

Modern Theravada depicts Yama as responsible for sending disease, old age, punishments, and even maladies and calamities to humans to warn them to behave well in their life. When a person dies, Yama summons and examines that person. Then, Yama sends one to his/her commensurate rebirth.

Yamāntaka (The Destroyer of Death)

Tibetan Buddhists conceptualized Yamāntaka as the conqueror of death. In the pantheon of Buddhist deities, there are several deities – Yamāntaka. Yet, Vajrabhairava is well-known among these deities. He is also among the Anuttarayoga tantra deities widely known in Tibetan Buddhism’s Gelug school.

Tibetan artists depict Yamāntaka with a wrathful expression. He manifests himself in various forms with six faces, six legs, and six arms that hold different weapons while seated or standing. Each face comes with three eyes.

Vaisravana is the god-king of Yakshas, a semi-divine natural spirit. He is the protector of the Lokapala (world). He is also the overlord of many semi-divine beings and the owner of the world’s treasures.

Depicted with jewels and a plump body, he is always shown as carrying a club and a money-pot. He is described as having three legs, one eye, eight teeth, four arms, and three heads also appeared in recent puranic texts.

In Buddhism, Vaisravana is referred to as Vaiśravaṇa or Jambhala. He is one of the 4 heavenly kings. He is also associated with Pañcika and his wife Hariti, the symbol of abundance.