Top Reasons That Made English a Dominant Language 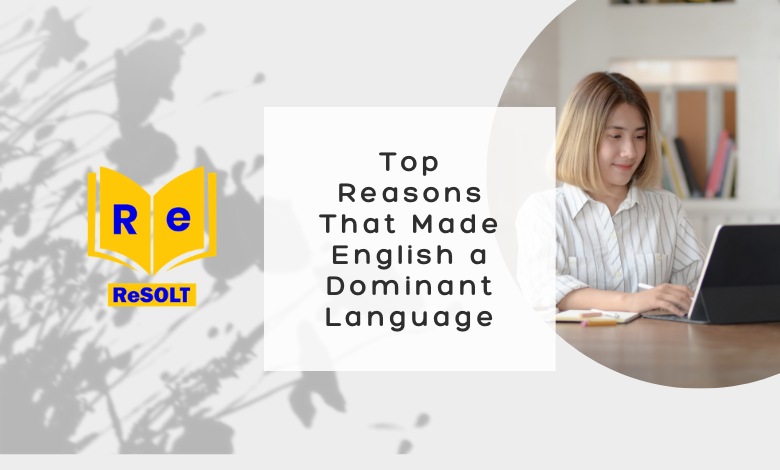 In this article, we will discuss top reasons that made English a dominant language. English is considered to be the second most spoken language in the world. If you are able to speak in english language, you can go anywhere in the world, or any corner of the world, you will be able to interact with their people, because you would surely be able to find someone who would be able to communicate with you in English as they also understand how they can utilize this language to express themselves.

Being spoken by a millions of people, this is considered to be the second language in the world. This is one of the characteristics of English that made it dominant language. Research has revealed that around a third of the world’s population speaks English as their native language. So lets understand it in a detailed manner.

English Dominance in the 19th Century

Brtish empire was a global empire which has ruled the world. It was believed that the sun never sets on the british empire. By the end of the 19th century, the british empire had a colony in every single continental and therefore English was also became a global language. This enlfuence never stopped and kept on increasing and reached to 458 million people by 1922. This is was estimated to be close to the quarter of the world population of the time which simply instentiates the dominance of English in the word.

The Rise of America as a Global Power

Albeit, the USA has always been relatively young country in the world, the united states is now a most superpower in the world specifically after world war II. The US stands ahead in almost all other countries in terms of military power, economic power, giopolicitial power etc. Everyone understands the value of being connected with a superpower like USA, hence, English becomes the first step for it. Without English, connecting with this country is out of the question. If you belong to a country where English is not a native language then you must learn English for being able to communicate with the people living in countries like USA and UK . Communication can be anything such as: Business related, Job related, Studies etc.

English Is the Language of Technology and Science

English is the language of Technology and Science. Browsing the world wide web, the websites are in English only. The other websites which are not in English do provide the ‘language Convertor” extension for the user to be able view the content in the language he wants to see. However, the extensions are taken from Google services, hence the accuracy of the content remains near 60% only. They are compelled to keep this feature in their website frontend because they do realize the value of English content.

They want the user to view the content in english if they are not familiar with their native language. This is a clear example of English dominance in the world. This clearly intentiates the influence of English in the world of technology. Many products that are designed and developed to be sold out in the international market are designed in English.

That’s not all, all medicins that are exported to several international countries across the globe, are coming with the English content only. Companies have come to realize that it their medicines’s content is presented in English, those will surely be purchased in the countries even if they don’t have English as their native language.

English is the Language of International Organizations

It has been widely acknowledged and accepted that in a situation when multiple countries come together, they must use a common language in which they can exchange their ideas and communicate to do the business together. Hence, most of the organizations in the international market has English language as a primacy language for communication. If you are getting more inclined towards learning English then join English classes in Mumbai and grow in your career. You are take your business to the next level if you know english and connect with overseas business entities.